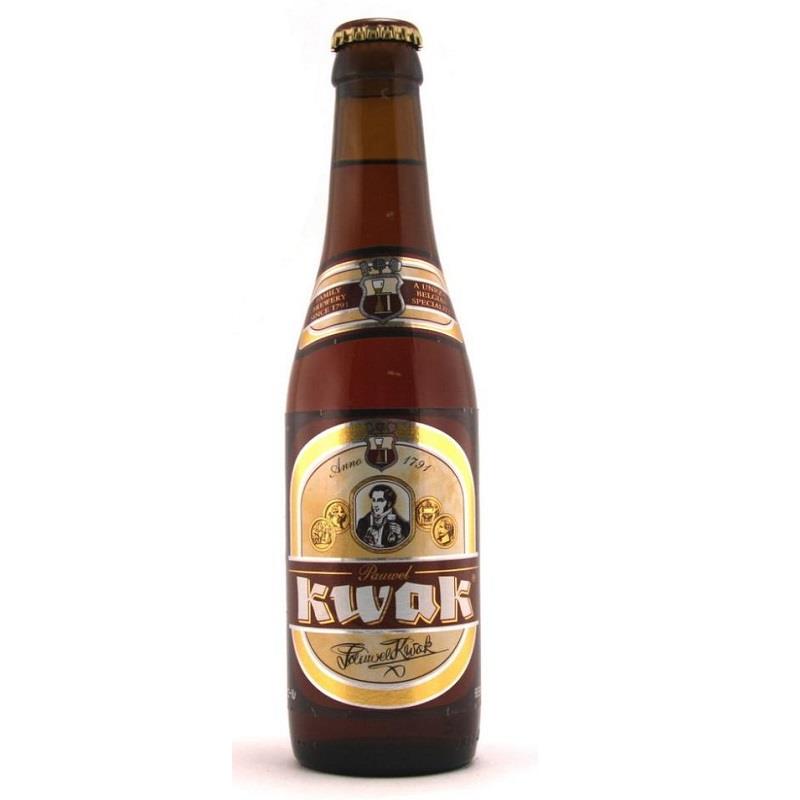 Kwak is recognisable by its deep bright amber colour and a dense, creamy coloured head. The pale wood of the glass holder makes a pleasant contrast with the beer. You will smell a mellow, fruity and malty aroma with a slightly spicy character (coriander, hops). Additional earthy and very subtle aromas of banana and perhaps also a whiff of pineapple or mango in the background. Discover a very mellow, fruity attack, a nougat-like solidity, and a slightly spicy character with hints of liquorice passing into a warm finish that reminds you of caramelised banana. The bitterness always remains in the background but in the end emerges delicately.

In Napoleon's time Pauwel Kwak was a brewer and the owner of the 'De Hoorn' inn in Dendermonde. Mail coaches stopped there every day. But at that time coachmen were not allowed to leave their coach and horses in order to have their thirst quenched along with their passengers. As a result, the inventive innkeeper had a special Kwak glass blown that could be hung on the coach. In this way the coachman had his Kwak beer safely at hand.

Brewery Bosteels
In the hands of the Bosteels family for over 200 years, the brewery relies today on the craftmanship of seven generations. In 1791, Jean-Baptist Bosteels established the brewery, and has been followed by generations who took over the brewery and never stop brewing, even during the world wars. At that time, the brewery played such an important role in the town, the family Bosteels were such influential people that we are not surprised that 3 of the 7 generations have been Town Mayors. In the year 1930’s Antoine Bosteels, 5th generation, carried on the brewing dynasty and played an important role expanding the sales of the Bosteels Pils into other regions such as Ghent, Antwerp and Brussels. His son Ivo Bosteels honored the iconic beer of Pauwel Kwak by bringing it back to the market in 1980; this is the beginning of the strong beers for Brewery Bosteels. In the year 1990, Ivo’s son, Antoine Bosteels, the 7th generation, understood the potential of strong speciality beers and especially the trend for blond ones. Driven by passion of the art of brewing and guided by his creativity, Antoine is at the roots of the succes of Tripel Karmeliet and DeuS Brut des Flandres.